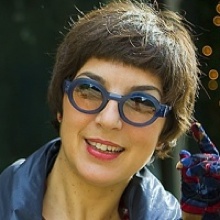 Marineta is a multimedia director, specializing in documentaries. She studied Contemporary History, Journalism and Film in Paris and pursued Post Graduated studies in Scriptwriting at the Sorbonne. She also studied Film & Television at UCLA,California. For the last few years she has been living and working in Greece as a Director on TV Programs, Documentaries, Films and Commercials. The last two years she was also teaching Cinema at the Faculty of Arts, Film Studies of Aristotle University of Thessaloniki. Her documentary Dreaming of Zhejiang is the only greek participation at the first ever PangeaDay, a TED Prize Event held in May 2008 in Los Angeles. She is member of the Pangeaday Filmmakers Community believing strongly in the intercultural dialogue and its force. She is currently working on her next documentary Living in Sacred Islands.