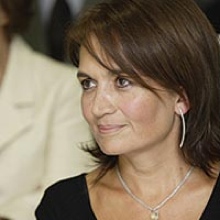 She is a Lighting Designer and Professor at the Theater Department of the School of Fine Arts at the Aristotle University of Thessaloniki. Holding a Master’s degree from N.Y.U. in Lighting Designing, Performance and Choreography, she has designed over the past 20 years, the lighting for more than 400 performances (theater, music, dance and opera) as well as for installations and artist’s exhibitions, in Greece and abroad. She has recieved excellent reviews for her work and has been awarded several prizes such as the Woman of the year 2009 in the category “Artist” for her overall contribution in Theater and Arts in general.

A significant moment in her career has been her participation in the Olympic Games Athens 2004 as the lighting designer of the Opening and Closing ceremonies. For the Opening ceremony she was awarded an EMMY award, by the Academy of Television Arts and Sciences, for Outstanding Lighting Direction, in L.A. in September 2005. Since 2000 she is also involved with architectural lighting. Passionate with Light she believes that either metaphorically or realistically, Light may influence our lives. She is the mother of Iris, a girl of 9 years old, who brings the most colorful light in her life.