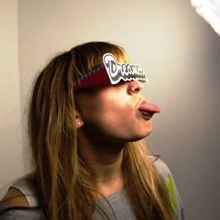 Claire Cohen is a young media professional in the sectors of television, radio and the internet. She currently works as a radio producer at MAD Radio, a Chief Editor, Copywriter and Line Producer at MAD TV, as well as a Freelance Graphic Designer.In 2009 she graduated Deree College majoring in Communication, Advertising and Film Studies. Long before that she has been practicing her communication skills as an intern in well known advertising companies in Athens, such as “Creative Plus” and “Watching.u”. She had the chance to share her passion for Event Planning and Line Production, working on major events such as Mad Walk 2011 by Vodafone, Amita Motion Concerts and Mad Video Music Awards 2011 by Vodafone CU.

Her great love for extreme sports is expressed not only though actual riding, but also through creative photography and filming of kite surfing and snow boarding sessions. Her creativity expands beyond photography and filming, to the world of fashion and a huge collection of head bands, a fact recently acknowledged by the fashion editors at www.queen.gr who titled her as the new definition of the “Urban Look”.