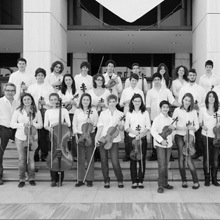 Camerata Junior was founded in 2010 by the Friends of Music Society, under the presidency of C. Pylarinos, with the aim to instill team spirit and collective musical action among  pupils, mainly through periodical preparation classes at the Megaron – Athens Concert Hall and participation in art events in Greece and abroad.

Camerata Junior counts 27 youngsters aged 11-22 who comprise the Orchestra’s main body and another 16 pupils aged 6 – 12 in parallel activities. The Orchestra’s preparations started off in February 2011 leading to the first public appearance on May 5th at the 20th anniversary of the foundation of the Camerata – The Friends of Music Orchestra , that took place at the Dimitris Mitropoulos Hall. The Orchestra’s next appearance was on June 21st 2011 at the Athens Megaron and on October 29th 2011 at the Thessaloniki Concert Hall.

Violonist Dimitris Semsis is the tutor and Director of the Orchestra and Wendy Clark, distinguished violonist and educator, as well as graduate and “partner” to the Royal Music Academy of London (ARAM), is the Assistant to the Director.

Dimitris Semsis comes from a family steeped in musical tradition since the early 19th century. His father Michalis Semsis was the first to teach him how to play the violin; he then carried on as an apprentice beside Tibor Varga and Otto Buechner at the Music Academies of Detmold and Munich respectively, and took classes with Alexander Pavlovic at the Belgrade University. He holds a degree from the “Athinaion” Auditory and the Royal College of Music in London.

He has also been: a member to the renowned Bach Orchestra of Munich under the conduction of Karl Richter; the main lead in the Camerata – Friends of Music Orchestra, founded by his father; the co-founder and the main lead in the Camerata – “Filoi tis Moussikis” Orchestra. From January 1999 onwards he has been the main violinist of ERT’s National Symphonic Orchestra until 2003, when he moved on to take the equivalent position in the Athens State Orchestra.

He is a tutor of violin at the “Moussikoi Orizontes” Auditorium and co-founder of the “Opus I” trio, with whom he has granted the Athens and Greek periphery audiences with various programs.  Οn behalf of the Friends of Music Society, Dimitris Semsis has produced and delivered numerous special courses for young students, as well as a series of open classes that aim to link pupils to the virtues and values of classical music.

In 2011 he became Art and Music Director of the Youth Orchestra of the Friends of Music Society, the so-called Camerata Junior, with which he has appeared at “Lilian Voudouri” Music Library in the Athens Megaron and the Thessaloniki Concert Hall.

The youth side of music