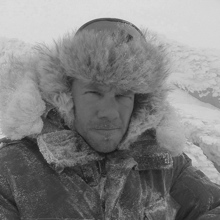 George Kourounis is one of the world’s most active storm chasers, a renowned global adventurer, explorer and television presenter. Based in Toronto, his efforts to document nature’s worst weather conditions have taken him all over the globe, into places most normal people are fleeing from. Whether it’s a tornado outbreak in Kansas, a monster hurricane in the Gulf of Mexico, forest fires in British Columbia, or even an erupting volcano, he’s usually in the middle of the action with his camera rolling. His efforts have been seen around the world on the Discovery Channel, National Geographic Explorer, BBC-TV, CNN and of course, his own adventure TV program Angry Planet which has been broadcast in over 100 countries. The program airs on OLN, City TV, The Travel Channel, The Weather Channel, Halogen TV & others.

He started chasing tornadoes and other storms almost 15 years ago and has continued to expand his explorations to include all types of extreme natural phenomena.

In January 2005, George brought his camera to the remote Danakil Depression in the harsh Ethiopian desert and was lowered 60 feet into the smoking crater of the active Erta Ale volcano. He spent a half hour filming on top of the freshly hardened surface of the lava lake wearing a protective heat suit.
This event made him the first person to have ever filmed from the inside of 3 of world’s most fearsome forces – Inside a tornado, the eye of a hurricane and inside an active volcano. 2005 also turned out to be his busiest hurricane season yet. He was able to intercept all 4 of the major U.S. land falling hurricanes, including devastating hurricane Katrina in Gulfport, Mississippi. While he filmed the storm, the city around him disintegrated in the incredible winds and storm surge.

When asked about his scariest experience:

“Getting caught in a tornado was truly frightening. It was after dark and we were on the outskirts of Oklahoma City when the 2X4’s and pieces of aluminum siding started flying towards my vehicle. The only thing I could do was to floor it and take shelter behind a shopping mall. The debris in the air was incredible. It was like driving through a swarm of bees. After it had passed, I was able to make out the cone shape in the darkness illuminated by blue-green explosions where it was destroying power lines.”

The question he is most often asked is simply: Why?

“There is very little of this Earth left to explore. The North and South Poles have been reached. Even Mount Everest is the scene of regular traffic jams on the side of the mountain during climbing season. I like to think of myself as an explorer that goes to new places in this world when they are under extraordinary circumstances. When the harshest storms are lashing the area or when the mountain is spewing molten rock. These are the new frontiers of exploration in the 21st century.”
He is also the host and co-creator of a television series that focuses on his experiences with extreme weather and other natural phenomena. The show “Angry Planet” is currently airing worldwide.

George’s explorations of our planet have included some truly unique experiences. In 2007 he became the first person to ever rig ropes across the Boiling Lake in Dominica and explore it from above.
“During the traverse, I was able to position myself directly above the most violently boiling section of the lake. To look straight down into what is essentially a giant witches’ cauldron was as frightening as it was exhilarating.”

In 2009, George was able to set foot on the newest land on Earth when an undersea volcanic eruption created a new island near the south pacific nation of Tonga. Having to swim ashore due to the rough seas, he discovered a crater lake that was still scalding hot from the recent eruptive activity.

His travels have taken him to such far-flung places as:

– The jungles of Rwanda to witness rare mountain gorillas.
– Into a cage surrounded by Great White sharks off the coast of Mexico.
– Flying in a helicopter over huge forest fires in Northern Ontario.
– The remote island nation of Vanuatu in the South Pacific where he got married on the crater’s edge of the exploding Yasur volcano!!
– Dog sledding above the Arctic Circle and kayaking with whales in Antarctica.
– Space flight training, including a zero gravity flight and being subjected to extreme forces inside 2 centrifuges.
– The fabled Timbuktu, in the Sahara Desert, documenting sand storms.
– Reactor #4 at Chernobyl, the site of the worst nuclear disaster in history.
– Into the Naica Crystal Cave in Mexico, home to the largest crystals in the world where the environment is so hostile that the heat and humidity can be deadly.
– And much, much more.

By sharing these adventures with the world, George hopes that he can inspire people to break out of their routines and do something that they consider a little bit scary.

“I’m not saying that people should run into hurricanes or take a rubber raft out onto a lake of sulphuric acid like I do, but just to step out of their everyday life and do the things that they’ve always wanted to do but were too afraid to actually try. It is amazing what people are capable of if they just face their fears and go for it. Overcoming personal obstacles like that makes for some of the best memories and proudest moments of our lives. Your comfort zone is a terrible place to be.

George is a member of the Explorers Club, the Royal Canadian Geographic Society the Canadian Council For Geographic Education, and was nominated for Gemini awards in 2008 and 2009 for his work on Angry Planet.