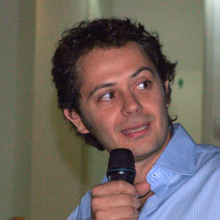 Theodore is a Genetics Graduate from the University of Newcastle upon Tyne, has a Masters in Human Reproductive Biology from Imperial College and a PhD in Medical Genetics from Kings College London.  His Post-Doctoral Research work at the National Centre for Scientific Research “Demokritos” in Greece was on hereditary breast and ovarian cancer. He is an Onassis and Embirikion Foundation scholar and has received a Young Scientist Award by the International Union of Biochemistry and Molecular Biology in Kyoto, Japan.

He is the Co-Founder and Director of “SciCo” (Science Communication – www.scico.gr), a Non Governmental Organization whose aim is to communicate scientific issues to the public in a clear and entertaining way. SciCo uses theatre, documentaries, interactive learning and other innovative means in order to communicate science. Theodore has produced, co-written and co-acted in the following theatrical shows: The science of Christmas (2008), the science of Love(2009), the science of Ecology (2009) and Ygeia En Gnosei (2010) which are currently being played in primary and secondary schools all around Greece.

He is also the Co-Founder and Secretary General of “Green Project” (www.green-project.org) another NGO whose aim is to create environmental awareness via science and art. He has participated in two road trips from Athens, Greece to Beijing, China and from Athens to Cape Town, South Africa with the aim of filming renewable energy sources and bioclimatic architectural designs along the way.

He has been invited to give talks on science communication in Tel Aviv, Bangkok, Seoul, Istanbul, Tokyo, Melbourne and Greece. In July 2010, Theodore was selected and participated in NASA Spacecamp training regarding space science.
He has made several special appearances on Greek Television and is featured in numerous publications in the Greek and International press.
Theo has travelled to over 60 countries and in his spare time composes music in piano. 